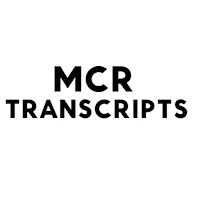 Loving something and being unable to access it sucks...a lot.

That is a lesson I have learned from having limited Internet access (as you've seen me whine about here every summer and winter break) when I am at home.

For a long time I--and many others--have had to deal with absolutely aching for news and information about My Chemical Romance while being restricted from it either by bad connections, language barriers or technology that simply does not aide us.

So, also for a long time, I had been planning to start an interview transcripts blog to help broaden the availability and findability of MCR information. Now that it has been populated with some content, I am sharing it here!

I will let the mission statement I posted on the blog speak to my goals and reasons behind the new project:

With a news blog and an active Twitter chat why, you would be justified in asking, would I create yet another MCR project?

It’s simple: information access.
1. We still have yet to master making multimedia items like audio and video searchable. That leads to fan confusion about the origin of quotations, their contexts and validity. I often see scenarios like this:


“Do you know in what article Gerard said ‘Let’s just say I’m good at the rodeo?’”
“No. That’s weird. Why would he say that?”
“I don’t know. Someone on Tumblr just said he did.”

There are several problems in the aforementioned scenario. One is that the medium is wrong. It was not, in fact, an “article” in which Gerard said that but in a radio interview.  Also, it is out-of-context, so it makes entirely no sense.

Transcribing video and audio interviews will make them more searchable.
Without knowing the context, a fan would have difficulties finding the WSOU interview (UPDATE: that transcription is in progress! Read Part One now!) from which the quote is derived. Additionally, and this brings me to my next point, sometimes they would not be able to access the interview even after they have found it.
2. Not all of us have high-speed connections that allow us access to audio and video. It’s sad but true. When I go home from University, I am among this group. Because one does not live in an area geographically suited for a high-speed connection or cannot afford it does not mean that the information should not be available to him or her.

Additionally, some people use screen-readers or devices that aid disability that are unable to play videos.

This may seem like a backward move to those in the technological fast-lane; however, there is power in knowledge and information should be there for everyone to find.

Transcribing video and audio interviews will make them accessible to a wider group of fans.
3. We’re an international fan community, and it is simply easier to translate text than it is to transcribe from audio. Simple as that. MCR’s fans come from all over the world. I can only imagine if my first language were not English and I had to do heavy translating each time I watched one of their interviews.
Transcribing video and audio interviews will aid in making them more understandable on a more global scale.

Obviously, I take my MCR very seriously, but I am certainly not alone in that. With hope, this page will aid fans in finding and verifying information while also including some fans who have been left out along the way.

So, from now on, when there is a newsworthy audio clip or video to go with a story I post here, I will also be able to link to the transcript.

Also, all available new interviews will be posted there; so, even the things that are not necessarily news stories (things I would post here and write about at more length) are available.

Check out the Index of Completed MCR Transcripts--there are a ton from 2012 that didn't necessarily make the cut as newsworthy enough to be their own stories!

I really hope this helps some people!

photo-em said…
OMG! It's a great idea. If I can help you, let me know. I actually speak spanish, but I understand almost everything in english.

About language barriers, I think It would be very helpful transcribe your transcripts in spanish or another language. Why? Well, I know there is Google translator, but it doesn't help a lot. So, It would be a great idea, too.

I wish you the best with this project.

There are actually fansites, like Contaminated Days, an Italian site who are translating the transcripts and posting them on their sites.

Transcripts that have been translated to another language have links to the translations at the time.

For now, thanks to Contaminated Days, it's only Italian translations, however.

photo-em said…
I see.
I'm trying to make a page like that with some friends, but in spanish. You know?. there's a lot of pages like Contaminated days, but there's a lack of pages in spanish. So, I think I will try to make a blog. I've seen pages like INFO MCR that translate interviews, but they use Google Translator which isn't helpful.