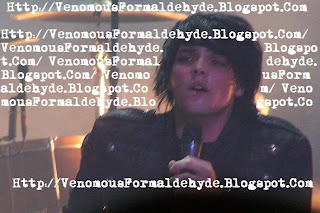 Note: This was originally posted near the time of the show, and I have edited it only slightly.

Much of the post alludes to the previous Projekt Revolution show I had gone to.

I apologize for this post's briefness, but -- to make up for that -- I have added a video of Gerard going off on his pre-"You Know What they do to Guys like us in Prison" tangent!!

Because of my mother's wanting to mess around all day, Emily and I arrived at Projekt Revolution at about 3:30 p.m., just before the main-stage opened.

I got posters from The Street Network's booth and hung them up all over the place and bought merch, then we decided to go find our seats (Yes, the horror, Cassie didn't have floor!). We had been expecting to have to go up a ton of stairs toward the back of the amphitheater, but that was not the case.

We were directed DOWN stairs and into the equivalent of a pit with seats. A total waist of pit-space, I say, but whatever. The actual standing room was a tiny gated-in area that could only hold 4 rows of people. Emily and I thought of being sneaky and showing the security guards our floor tickets from Tampa and getting in, but we aren't that bold. Taha! We still considered our spot pretty awesome for being seats.

We conserved our energy during the opening bands, then went COMPLETELY crazy when TBS came on. We were so insane that the people around us weren't watching the band, they were watching us. Of course, we didn't care, though. Nothing is worth caring about when you're watching a great live band. You can just lose yourself, and I think even those watching us with horror could appreciate that.

By the time MCR came on, I was nearly exhausted, but exhaustion, hunger, anything is only a between-band thing for me at concerts. When the next act comes on, I forget everything and am re-energized. MCR is the best battery.

They played the same set, but it was just as perfect as ever. Those boys cannot possibly get old! Emily and I still drew attention and got stares. I was even more insane during MCR's set than TBS's.. Who would have figured, right? Ha!
Some things I remember well:

-Gerard, after "Mama:" "And wouldn't you believe it? I never, EVER, had one lesson. *stalks away*"

-The Mic ending up down a certain someone's pants. Poor mic.

-Lyn-Z, the bassist of Mindless Self-Indulgence, and three of the guys from Julien K standing right behind Emily and me as we went crazy during MCR.

We left before Linkin Park again, and got lost on the way back to our hotel, but it was GREAT!!


The reason behind this blog series