Taking Back Sunday and Envy On The Coast [Part One] 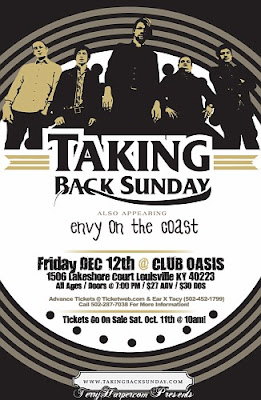 On December 12th, 2008 at 7:30 in the morning, two souls found themselves alone and freezing on the carpeted front steps of The Oasis bar and concert venue in Louisville, Kentucky. The only company they shared was that of cigarette butts, foreign newspapers, and forgotten and molding cheese and crackers. Having suspected similar souls would be partaking in the same activity, the two had set their hotel alarm for the “wee hours” and rushed to the bar, which faintly resembled a run-down mosque. Those foolish two were my friend and I, and the more intelligent concert-goers did not start showing up until we had been there two hours, much to the relief of their toes and other freezable appendages connected to them.

It was 30 degrees, but concert-goers are strange specimens who are willing to cope with the elements, and even build up an adrenaline-fueled tolerance of them. It’s a sacrifice that is nothing when compared to the reward of clutching the barricade and being nearly close enough to one’s favorite band to touch them. Queuing totaling well over 20 hours, sleep totaling less than 3 hours within 36 hours, snowstorms in the dead of Canadian winter, temperatures high enough for sunscreen to melt in Florida, and running on little to no food for days are all on my “I Survived” list and are only a few of the items listed.

The concert-goers in Kentucky had other devices to cope with the elements, however. Well before noon a few were indulging in warming gin while they waited for the Japanese sushi bar next door to open where alcohol is served in your choice of a novelty ninja or geisha cup. I don’t know from experience how much alcohol can warm one’s body, but it was a popular theme in the day’s line wait. At noon, with the arrival of a denim-clad lad and his lovely girlfriend, the drinking level was raised: “I say we all throw in and get a box of wine!” proclaimed the denim-clad one, and so it happened. Needless to say, the day became more interesting the more alcohol was consumed: voices grew louder, and personalities soared. It was the alcohol that passed the time for some and the watching of the alcohol being consumed that passed the time for some others like my friend and me, who were too young to join. All were happy and –by the end of the day- I could remember all of my fellow fans’ names and stories. It was nice meeting you all!

As for my side of surviving, fleece blankets are overrated, far from warm, and my poor toes paid the consequence by becoming so very cold that I limped when I walked away from the line and to my hotel for bathroom breaks throughout the day. Toward the end of the wait, I became so very cold that my shivers were no longer surface-shivers. They had grown deeper and deeper until those final ones before the doors opened seemed to rattle and cave my chest, causing an avalanche inside each time they came. At least we had the friends we had made throughout the course of the day to distract us with the singing of everything ranging from doo-wop songs to Alexisonfire. Really, the people were great at this show—an older crowd, which was a relief for me, as; I have become used to be “the old one” at shows. They all had impeccable taste in music and were friendly, and those line-waiters in the service were willing to share their army sub-zero sleeping bags, which is always a plus.

At about 7:00 we were put out of our freezing misery when the security guards eased open the doors my friend and I had protectively been leaning against. They made us back up to the steps upon which my friend and I had sat early that morning, then proclaimed something horrifying. “Everyone needs to circle around and line up at the end of this ramp.” They pointed to a ramp and an all-around bad scenario where my friend and I will have suffered for nothing and gotten into the venue last. After yelling in protest and nearly crying, we at the front were reassured that we would be let in first and a system was made to makedamnsure (sorry, I had to) of that. The crowd parted to let the front-of-the-liners, all of whom were protectively pointing out and clinging to each other to make sure we all kept our places, through so that we were again at the front and all drama was aside. My hands “X’ed,” I walked into the venue with my friend, through a maze of a bar then straight to the barricade. Thank goodness.

The Oasis is small. In my research prior to this show, I found that the concert capacity is 300. This fact was contradicted by others while we waited in line, but I will stick to it, since it is what the venue’s website says. The floor before the stage is narrow and long, and –here’s the crazy part- there are windows lining the entire right side of the crowd. WINDOWS! At some of the shows I’ve been to, people have been thrown in the air full-force; in my experience, windows + crowds = bad idea. But they looked cool, so whatever. The barricade was also strange. At the left side of the floor, there was not a barricade. It was a spot where people would have to hold back the crowd with their own force, well- until they set up a makeshift barricade there after the first band played. There is also no escape for those who end up in front of the barricade. Most venues have a long walkway from the space in front of the barricade that brings the person back to the rear of the crowd. This place had only a set of steps, blocked by wires, that lead backstage. For this reason, crowd surfers were not ordered to the back of the crowd, but thrown back into it by security. That’s fine, no footprints on my face from this show. Ha!

Well, now that I have told you as much as I can tell you about my experience without bringing up the actual show, I’m going to take a break. Keep your eyes open for Part two, where I will actually review the show. Ha-ha!